Imagine you could run faster than 20 miles an hour and jump over 7 feet high. Well now you can – welcome to Bocking!

Based on the running movements of a Kangaroo, Bocking or Power Bocking was invented by a German guy of the name of, yes you guessed it, Alexander Bock! Not only is it meant to be huge fun but also gives you a great cardio-vascular workout and could be a good way to lose weight and tone and strengthen the body’s core muscles.

I had been curious about Bocking for some time, and when ITV asked me for some fresh and exciting new sports to film for their news segment “on the up”, Bocking instantly sprang to mind (pardon the pun!).

I came across a forum called Pro-Jump UK which I thought was a great place to start, so left a message saying “Can you help?” and Bocker Graham Bullman came up trumps. After a few emails and a phone call, Graham had gathered a handful of guys from Wales, London and the south coast, organised a spot to film at in Bristol and even a gym as back up! If only things were that easy to arrange for filming all of the time!!

We arrived on a cold winters afternoon at the Lloyds amphitheatre in Bristol city centre and were soon surrounded by Bockers. ITV arrived and set up their cameras to film the action, and they roped our guy in to get some footage on his steady cam. The Bockers warmed up and wowed us and the cameras with some amazing tricks, splits in the air and jumping off steps and walls, all probably named tricks, and to end it off finished with a bit of a can-can. Following this, ITV were all done and the onus turned to us newbies. “Come on then guys who’s putting a pair of Bocks on next?”

A handful of us were anxiously looking forward to this bit, and I was soon strapped in to a pair of Bocks ready to go. The first time i moved away from the wall, god it felt unnatural! I was wobbling all over the place and it took a little while for me to get my balance properly. The guys supported me as I tentatively moved forward a few inches at a time until I reached a wall about 15 feet away. The only thing I can compare the feeling with initially is the feeling of walking on boggy ground, a kind of sinking feeling. I headed back and forward a few times and started to find my feet a little. When you get it right it just feels right! The guys were on hand to give us lots of pointers – the first being to have your feet slightly pointing in to avoid clipping heels, and to keep your foot flat rather than walking on heel or toes. Putting this into practice made things a lot easier and I was soon walking backwards and forwards unaided. I did starting getting a little too cocky for my own good though, and tried my first two footed bounce – only to find myself led flat on the floor looking up at smiling faces. OK so first lesson learnt!

I was helped back up and carried on practicing, working up to gentle bouncing and getting used to stopping and bouncing on the spot and it felt really empowering. You get the sense every now and then of the full power of the Bocks as you get a little carried away and it became apparent how mental some of the jumps the other guys were doing actually are! From then on watching the other guys jump off 5 foot walls, my respect for the time and effort they must have put in to land properly was growing quickly! And with the thought that some of the guys can do somersaults kind of gave me goosebumps! This really is an extreme sport but such a fun one.

And i wasn’t the only one trying them for the first time as Simon Wyndham and Louise Towler, both involved with the website, were gently bouncing their way around sticking near the safety of the wall just in case, although bit more practice and they were soon without support from wall to wall. We all came away with a real sense of achievement. 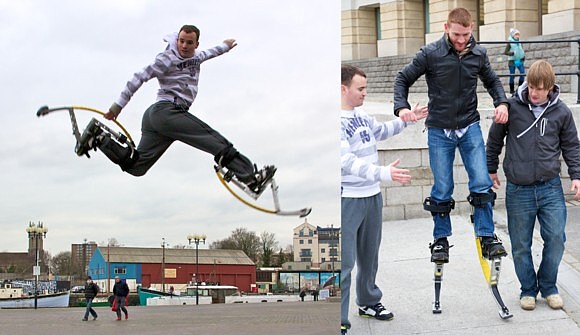 A huge thanks to the guys who came along that day and not only helped with the filming but also introduced us to a great sport that we hope to get more involved in very soon!

So what do you do if you want to have a go?
The best way is to join and get involved with a forum like the Pro-Jump UK one. Here you will get advice on what stilts to buy, tips on starting out and a great way to meet people in your area who also have them. Wearing safety equipment is essential, and wearing wrist guards, knee pads, elbow pads and a helmet will help protect your from falling, but the guys explained that the sport is no more dangerous than anything else played or practices on hard surfaces.
With a few pointers, most people can walk unaided on a set of Bocks within about 20mins. The sport is open to all ages, and if you like the look of Bocking why not get in touch with your local club/Bockers and give it a go.

More pictures can be seen on the following link:
Photographs of Powerising with UK Active Outdoors in Bristol, UK