To the impartial observer Britain does not appear to have any mountains. Yet the British invented the sport of mountain climbing and for two periods in history British climbers led the world in the pursuit of this beautiful and dangerous obsession. “Unjustifiable Risk” is the story of the social, economic and cultural conditions that gave rise to the sport, and the achievements and motives of the scientists and poets, parsons and anarchists, villains and judges, ascetics and drunks that have shaped its development over the past two hundred years. The history of climbing inevitably reflects the wider changes that have occurred in British society, but the sport itself has also influenced changing social attitudes to nature and beauty, heroism and death. Over the years, increasing wealth, leisure and mobility have gradually transformed climbing from an activity undertaken by an eccentric and privileged minority into a sub-division of the leisure and tourist industry. At the same time, competition, technology and increasing specialisation have created climbs of unimaginable difficulty at the leading edge of the sport. But while much has changed, even more has remained the same. Today’s climbers would be instantly recognisable to their Victorian predecessors, with their desire to escape from the crowded complexity of urban life and willingness to take unjustifiable risks in search of beauty, adventure and self-fulfilment. 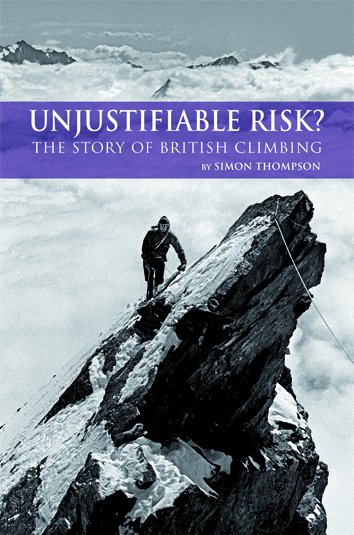 Simon Thompson started climbing at the age of 16 and has been fascinated by the sport ever since. A former director of Anglo American and chairman of Tarmac, he has lived in seven different countries and currently sits on the boards of companies headquartered in Russia, Sweden, the UK and the USA, but he continues to escape to the mountains whenever time permits.

Before I read this book I thought I knew a little bit about the history of climbing but I was very wrong!

As a novice climber and mountaineer in my spare time, the history of climbing fascinates me. We are so concerned about having out modern equipment just right before attempting a trek or climb, but often forget that that has already been completed by thousands of others many years previous. ‘Unjustifiable Risk’ tells us the stories of the pioneers, the explorers of the very mountain ranges that are now well mapped out and climbed. You will hear the early stories of them pushing the boundaries with their very basic equipment – in the beginning at least anyway – picking their routes and taking the risk.

How the author Simon Thompson managed to put together all the quotes, references and historic information is beyond me, but he puts across and explores well the various different attitudes and reasons for why climbers climb. Although the reasons for climbing seem wide and varied and different for everybody. The book is well set out too, in understandable chapters which are broken up in to relevant periods of time and covers all of the dramatic events in climbing history. The author even touches on how technology and innovation with climbing gear has opened this sport up to the wider audience, rather than a few hardy explorers and people with often privileged backgrounds.

As you read through the various ages of climbing, the book explores a vast amount of avenues that all relate to why and how climbing moved across Europe, the classes, age groups and the sexes, and how it was influenced by the industrial revolution, cultural, poetry, politics, religion, war, changing attitudes to name but a few. Further in to the book it all makes complete sense as the book explains how what at first were thought of as dangerous, unforgiving places, began to be seen as beautiful, challenging and scenic areas that people now flock to. Although some of the ethics and stories of the insane situations that climbers have got into will make you question your own personal view on climbing and climbers involved.

The images in this book not only put faces to names of the climbers you’re reading about, but also give you that nostalgic feeling of how climbers, and inparticular Brits with that British stiff upper lip approach to the world, took on some of the worlds toughest climbs. Even if at times reckless! I would have loved to have seen more images of climbing days gone by.

If you have any interest in climbing, you will relate to some part of this book and some of the reasons why climbers take the “risk”. I personally was inspired when reading this book, and soon found myself agreeing with some climbers reasons and disagreeing with others. So I guess the beauty of this book is that not only do you look back throughout many years of how and why climbing came about, reading amazing snippets of famous stories and getting an insight in to why they took the risk, but you will also question your own reasons for climbing and learn a lot about yourself. A personal journey from reading a book…not bad!

I would recommend this book to anyone interesting in Climbing, mountaineering and walking in general, an enjoyable read which gives great insight. A must read!