Arriving at Alan Kimber’s Calluna, home of the West Coast Mountain Guides http://www.westcoast-mountainguides.co.uk climbing centre in Fort William on 19th February 2005 the first thing I noticed was that the place, in contrast to my last visit on Dec 4th of 2004, was buzzing with activity. The car park was full and at 8:20 guides were already with clients going over gear lists and preparing for a day out in what was looking like a fine day for Scottish winter climbing.

I soon found Alan amongst the hub of goings-on and after a quick re-acquaintance he introduced me to my guide for the day. Clive Roberts, a softly spoken Irishman, with more mountaineering skills in his left pinkie then I’ll ever hope to have. I knew right away that I was in safe hands. Our third soon joined us, Chris Fisher, a high ropes expert originally from Scotland now based in Lincolnshire.

The course Chris and I signed up for was the Winter Mountaineering Intermediate. I took the £150 option staying in the B&B closer to the centre of Fort William.

With the CV Chris showed up with I was wondering if I was out of my league or if I’d be holding him up. As it turned out Alan did a great job of matching skills, Chris and I turned out to be well suited for a weekend of climbing together.

After an equipment check and discussion about goals and aspirations for the weekend we set off for the gondola station at the Nevis Range ski resort. Once parked and properly geared up we paid £7.50 to be deposited 550 metres higher up on the windy and icy slopes of Aonach Mor.

From the top gondola station we headed west-southwest to round a ridge before heading south to the Aonach More East Face. All the while slowly gaining elevation from 650m to approximately 950m. The hour’s walk was very valuable as it allowed us to review the various aspects of winter safety. Also it allowed us to have a look at the climbing area from below, the later being very valuable when in an area for the first time. We could see what routes were busy and also orientate ourselves with the layout of the ridge in comparison to the guidebook before commencing the climb or potentially repelling down into a busy gully.

Before attempting the face we climbed an ungraded ridge. This ridge was much easier but still presented difficulties and necessitated a rope. It allowed us to set-up anchors, place gear, belay each other and review most of the techniques we would require for the rest of the weekend. At the time I remember being anxious, if not impatient, to be on the main ridge, where the adults were playing but in retrospect Clive’s approach was spot on. We needed to demonstrate the basics skills to a certain level before tackling graded climbs. Mountaineering is like that; it’s something that just takes time to learn. There is no substitute for experience and the consequences of cutting corners are too great.

Once back on the ridge, on top of our practice climb, we had a quick drink of tea and some chocolate, then we moved off for the main event.

We decided on Forgotten Twin, a Scottish grade II winter climb. Getting to the climb was the first slap of reality. We traversed under the ridge, which was almost entirely overhung with cornice. As the sun was out and it was near 1:30 by this time, Clive reminded us that quick was better than slow during the traverse. The understated point was well taken and we made cautious haste below the potential hazard.

At the bottom of the climb we roped up and I got to lead first. I use the term “leading” loosely because while Chris and I remained roped and anchored at every point, Clive strode beside us with ridiculous ease, unroped. To tell you the truth, I wasn’t bothered. I had ice axes in my hands, crampons on my feet, winter gear on my harness and I was using them all in anger. I was ice climbing! Well truth be told, hard snow climbing at that point.

I might have led off but Chris had the pleasure of leading us up over the cornice. The guidebook describes Forgotten Twin as “an easy gully with a couple of steeper stretches before the cornice exit”. A COUPLE OF STEEPER STRETCHES. Basically the cornice formation forced a move to the left where the whole 120m ridge drops away with nothing but your axes to use as leverage to get up and over. I love heights, I’m weird that way, and obviously Chris has no problems either, but I had a giggle thinking of what he might have been whispering under his breath as he took the cornice on lead. 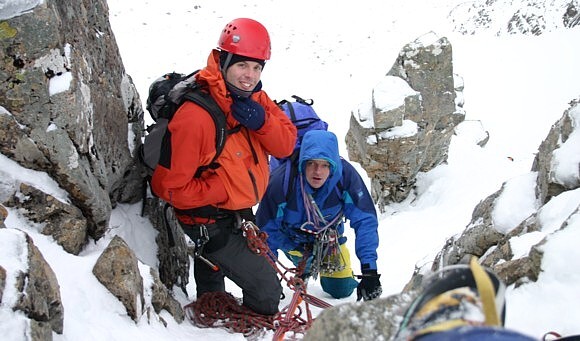 At the top, blasted by winter winds, we celebrated our first graded winter climb with more tea and chocolate before descending two hours back to the top gondola station just as it closed at 5:00.

To save time we met Sunday morning in Glen Coe. This group decision was really for my benefit. I had an 8:00 flight from Glasgow back to London that night. The day’s target was the Dorsal Arête route on Stob Coire nan Lochan Summit Buttress, another grad II but with a very exposed and classic finish.

In the Glen Coe valley where we parked (150m) not a flake of snow lay on the ground but looking to the top (1115m) we could clearly see the summit had a thick layer of snow. The sun was out; it was going to be another great day. Luck was on our side again.

The two-hour approached proved to be a constant battle of cold vs sweat. Clive’s pace and adage of never breathing too heavily or sweating in the mountains got us to the bolder field (820m) in good shape and we proceeded to put on harnesses and roped up.

We spent 2 hours climbing the Arête moving to the right whenever possible to add difficulties and stay away from another group that was on the left side of the ridge. After 6 pitches (we were on a 45m rope) of first-rate climbing we hit the Dorsal part of Dorsal Arête. Once there you realise the people naming these routes aren’t mad. It literally looks like a fin sticking out of the mountain. Knife edged and 10 meters higher than the surrounding area, it lived up to its classic reputation. Unfortunately for us there was a group on the crux and a queue of two groups waiting. We sensible opted to skirt around to the left.

One more pitch took us to the top for some outstanding views over Glen Coe, Aonach Eagach Ridge and Buachaille Etive Mor where I had climbed the curved ridge during a previous trip.

Standing on the summit with Clive and Chris I had the tremendous sense of accomplishment. I know that there has been thousands of people on that ridge before I came along,, I am also painfully aware that I had a guide beside me making sure I was safe every step of the way but looking out at all of the historic routes in front of me having just experienced first hand what Murray was writing about in his classic book Mountaineering In Scotland really did strike home and in an instant justify the expenses involved and time away from family and friends.

I highly recommend the West Coast Mountain Guides for anyone who, like me, has dreamt of climbing snow-capped mountains. Fitness will make the experience more enjoyable but you certainly don’t have to be a top athlete to enjoy it. Regardless of your climbing ability Alan Kimber and the very competent guides he works with are capable of providing an experience to suit your skills.

On an education front, the skills learnt with Alan have come in very handy and made me a much safer climber, see Avon Gorge in the Rain story in this section. Spending a weekend or two in the company of accomplished guides will dramatically accelerate your the learning curve.

Accommodation – I stayed in the Stobahn B&B – Gorgio Boggi is the owner, Maybe it’s because my wife is Italian too but I always feel like I get special treatment. The rooms are clean, the price is unbeatable and the breakfast will keep you going in the hills all day. Contact Gorgio at boggi@supanet.com or Tel:01397 702790 Fax:01397 702790

Alamo rental car tried to charge me for a cut tyre that was clearly fine when I returned the car. The notification they sent me had no return address, no account number and no phone number for me to query the automatic charge against my credit card. I later fought the charge and succeeded, as they had no record of the tyre actually being fixed. As a result I will never rent from Alamo again. I don’t recommend you do either – Very dodgy organisation. A.Caird